août 06, 2013
A quick post to say that I am going to Bardo tonight, as I do every night. I remain hopeful in the power of people to change the course of events when leadership fails to do so. 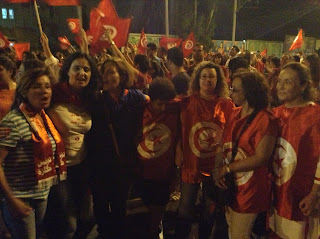 For those who see this movement as a movement of anarchists, old regime folks, or secularists unhappy with elections results, trying to disrupt the democratic path of Tunisia, I would like to remind them that:

- Ennahda and its partners promised to finish the constitution within one year. The legal text calling for the establishment of the NCA also gave them a deadline of one year. It is now almost two years after the elections and the constitution drafting process is not over, so the people at the sit-in have a point in wanting to dismantle the National Constituent Assembly.

- After Chokri Belaid was killed, Ennahda's PM, Jebali, and the rest of the political spectrum called for a government of independent experts to manage the government's affairs, but as soon as the popular anger resorbed, Ennahda's right wing said no. Meanwhile, the economy is declining, the security and terror threat have never been this high. Beyond the moral/political responsibility of Ennahda's party and its partners that allowed political violence to thrive and the complicity of some of Ennahda's leadership, the current environment will not allow free and fair elections to be organized any time soon.

I don't want to go on and on listing the failures of the ruling troika on managing this transition, but it is obvious to me that this team has failed to deliver. The death of NCA member Brahmi on July 25th sparked widespread popular protests and anger towards Ennahda and, to me, marks the end of the rule of this troika. At this point, most Tunisians seem to agree that we cannot continue this transition in the way it is currently taking place.

So where do we go from here?
- I first want to go back to Jebali's proposal for a government of independent experts that will inject talent and competence into the government, and make sure the state apparatus will remain neutral during the next elections. Tonight marks six months since Chokri Belaid's death and we don't want to lose any more time. The mandate of the head of government is as large as Ben Ali's mandate and Ennahda needs to give up on this position.

- I would like the NCA to be dissolved as currently it is a tool in the hand of an "illegal" majority which allows them to remain in power endlessly and secure a constitution that will serve its immediate interests. That said, I am not in favor of starting from scratch once again but instead would like to see a consensus among all parties to expedite the work of this NCA by agreeing on a final draft and thereby auto-dissolving themselves once the constitution is adopted (a matter of one month). So, in short, dissolve yes, but the how is open to negotiation.

- Agree on a binding and realistic date for elections (ASAP) that will be organized by an independent commission.

Many may wonder why Tunisians would want to go through this hassle while the constitution is almost finished, elections are probably months away, and there is a real possibility that the opposition will vote Ennahdha out of power. Personally, I have lost all trust in Ennahda. They have shown that their own interests are more of a priority to them than the interest of the Tunisian people and the future of this country. I hope they prove me wrong by accepting to work alongside all the other players and govern by consensus, in order to ensure that our efforts to topple Ben Ali will lead to a democratic and prosperous Tunisia. Untill then, I will be in Bardo.